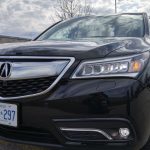 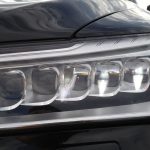 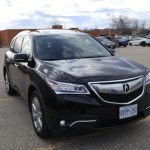 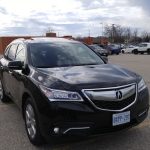 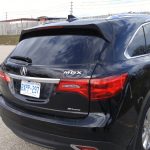 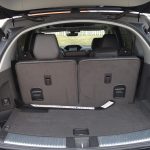 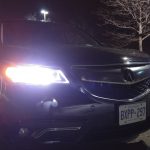 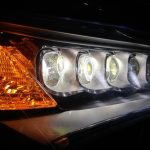 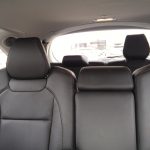 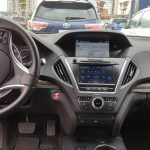 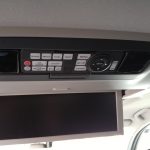 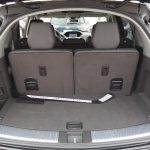 Acura continues a strong offering with their 2016 MDX.  Adding a nine speed transmission with paddle gearbox, shared with the newly designed Pilot, they’re building on a strong contender in the premium crossover SUV market. Acura have designed beauty into the MDX, both inside and out. Flair from the five jeweled LED headlights is pronounced. Bodylines are aggressively simple.  Performance matches the look, and Acura’s performance driven spirit is not lost in the MDX’s size.

Interior comfort is on par with others in this class.  Soft, comfortable Milano leather dresses all seats.  Driver and passenger are treated to ventilated heated and cooled seats, and heated seats for the split second row bench.  Seat and climate controls can be managed automatically, and intelligently, by the MDX’s climate control system.  The ELS 546W surround system is one of the best sounding systems in the segment, pairing well with the ultra-wide DVD system.

Acura have poured a lot of track time into perfecting the MDX.  Combining build materials to reduce weight, the 2016 MDX has achieved an improvement in Nurburgring performance over its predecessors.  Newly added nine speed gearbox, with paddle shifters, brings the MDX closer to its German competitors.  Shifting is fast, accurate and firm. Acura’s gearbox never questions where it needs to be.  Acceleration is powerful and on demand.  Acura’s Super Handling all wheel drive lives up to its name.  Traction is excellent in all road conditions.  The MDX uses dynamic torque shifting to boost cornering and performance, giving the large crossover a sports sedan like feel.

Adding nine speeds to the 290 hp 3.5Vp helps the MDX produce some impressive fuel numbers.  The MDX managed an average of 21 MPG (11.1L/100km), spot on what Acura says combined mileage is.  Multiple cylinder management keeps highway driving easily in the 29 MPG (8L/100km) range. Shift by wire, now more common across Acrua vehicles, is quite nice. It proved intuitive across a variety of drivers, even favored by them.

There is some very tough competition in the premium crossover market, but Acura seems to have struck a chord with buyers.  The MDX is one of the best-selling crossovers in its class.  Its ride and comfort leave little doubt why.  Fitted with sound deadening, double pane front and passenger windows, thickened glass throughout, the MDX cabin is quiet.  Road noise is extremely well managed.  In comfort mode, the MDX cruises level over some of the worst post-winter potholes.

Driver and passenger seats are thick, wide Milano leather chairs.  They provided ample support for short, city trips, and long highway hauls.  A second row split bench was a pleasant surprise.  Not only is this practical, it seats three adults; all of whom enjoy premium comfort.  There are plenty of comfort features at hand, many of which are automatically controlled by the MDX. It’s rather nice to fire up the MDX on a cold day and have a heated seat already on. Third row foot room is a bit lacking, but seats are still wrapped in soft Milano leather and comfortably padded.

With the third row up, the MDX suffers from some cramping in the rear cargo space.  While small, it’s still more than what you get in many other premium crossovers.  Because the MDX has a three passenger second row bench, wide enough to handle three full kid’s seats, the third row can be stowed.  When required, you can easily access the third row with the push of a button.  Storage in the MDX is ample; Acura has found many cubbies and nooks for travelling bags.  With the third row stashed away, there is plenty of space for travelling.  For a family of five, the MDX is a great luxury road trip vehicle.

Parking and maneuvering are supplemented wonderfully by a full 360 degree camera. Warnings of oncoming traffic are invaluable in parking lots. You can manually engage the camera to help park in tight spaces, eliminating most blind spots.

Acura has opted for a dual LCD screen configuration in the MDX.  At first glance, the layout can be a little overwhelming. However, after a short period, the interface was easy to understand and use. Dual screens allow one to display static data, like a nav map, while functions, like audio, are controlled on the other.  It was nice to have the route information still displayed while controlling the rear DVD/BluRay player.  Voice functionality is still clunky, but simple menu navigation compensates for it.  The second LCD vibrates on touch, providing kinetic feedback of the buttons pressed. Sensitivity is accurate, with minimal pressure required. The MDX Elite comes with an ELS Surround 546 watt 12 speaker system, complete with DTS and Dolby Pro Logic. Speakers are placed to optimize the sound distribution, bringing an audio experience on par with premium German crossovers.  A 16.2” ultra-wide screen is class exclusive to the MDX.  Long trips are made easier with blu-ray movies, and arguments are avoided when two inputs can be played at once. Volume controls on the wheel use a small wheel instead of pads; a nice touch.

Acura has fitted the MDX with the latest in collision avoidance and driving aids.  On par with other premium crossovers, the MDX delivers capable adaptive cruise control, blind spot monitoring and lane keeping assist.

Reliability reporting is an oft omitted part of reviews. This feature is only for vehicles not on a new redesign.  While the 2016 MDX does feature a transmission refresh, this generation began in 2014.  Reliability data comes from truedelta.com, a collection of owner surveys for thousands of vehicles. Scores are based on repair trips per 100 vehicles, with small sample size data omitted.

The Acura MDX scores an average of 24 repair trips per 100, or “good”, since 2014.  This means it performs better than average for reliability when compared to all other models of the same year.  You should expect great return on investment with the MDX with regular maintenance.

Acura has packaged luxury, performance and design into the MDX. Great attention to the smallest of details has produced a premium crossover of great value.   Even fully loaded, the MDX stands toe to toe with other premium German built crossovers. Smooth performance, high class interior and artistic design all make the MDX a great driver’s crossover.